Hello to all! I'm sorry I haven't made a blog for a while. I've been in the studio a lot doing writing and recording, and it's been a lot of fun! Last week I got to work with Matt Squire and Victoria Horn, and this week I've been working with Daniel Bedingfield and Kina Grannis. They're all really great and talented people! I can't wait for you all to hear the songs that we've been working on :) heheh. But I've been loving the writing sessions!

All right, so Monday while we were writing, Kina told me she was going to the Imogen Heap concert. I just about passed out! I have been wanting to see Imogen Heap for soooo long and she's one of my favorite musicians! So I got tickets for me and my aunt and we got to go to Imogen's show. It was AMAZING! it was fun to see how nervous Imogen was and she was just so genuine and quirky. And then her music and the way she loops cool sounds is incredible. I couldn't get enough of it, and she kept going until midnight lol. I was exhausted but I was so happy to watch her. But anyway, you can never get enough of Imogen but you've probably had enough of my blabbing lol.

That's all I have for right now! More writing today so I better head off. There are some fun things coming up this week that I'll talk to you about next time! But until then I'll talk to you later!

Song for the day: The Moment I Said It - Imogen Heap
This song really stood out to me when she performed it at the concert. SO good! 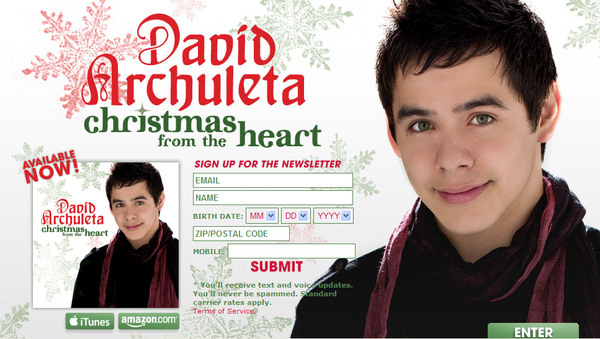 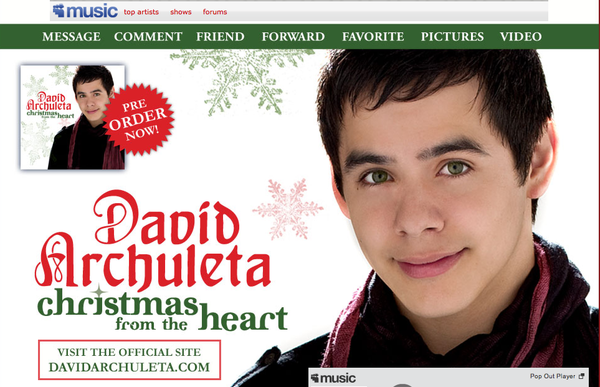 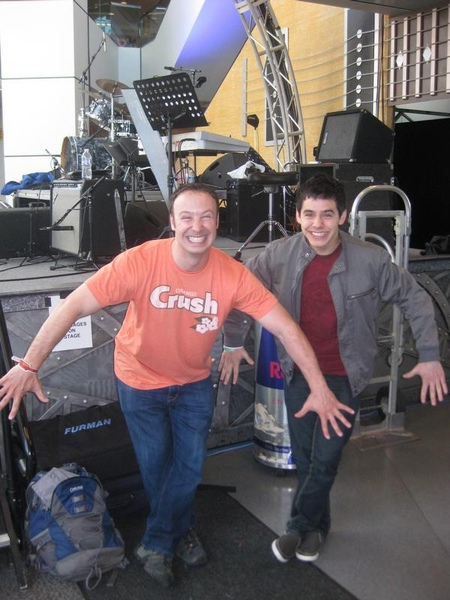 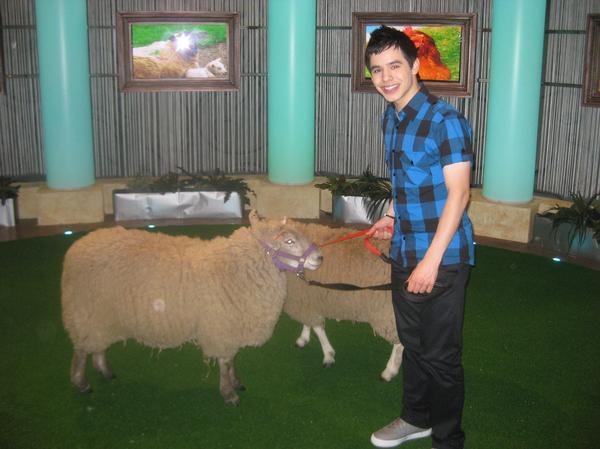 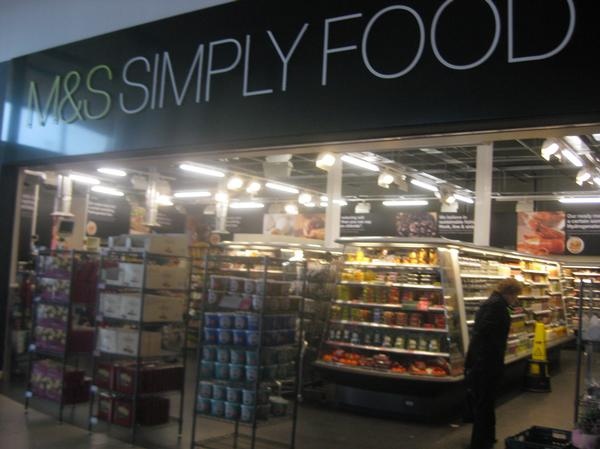 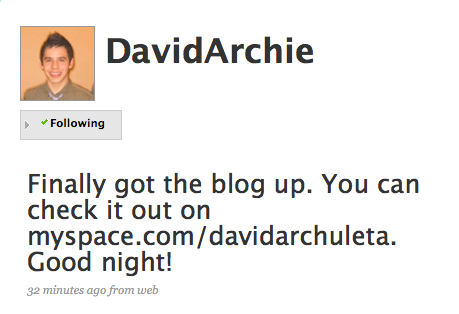 I'm so excited for this summer and to tour with Demi Lovato! Tickets go on sale to everyone TOMORROW at 10am. This will definitely be one of the hottest shows of the Summer and I can't wait to see you there! Go to www.ticketmaster.com .. to see a complete show listing and to purchase tickets. See you soon! 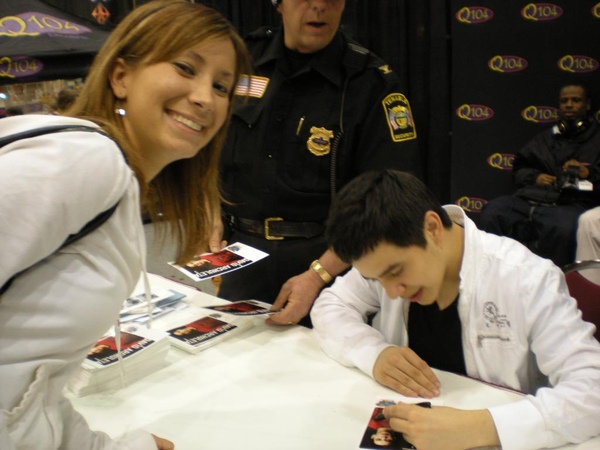 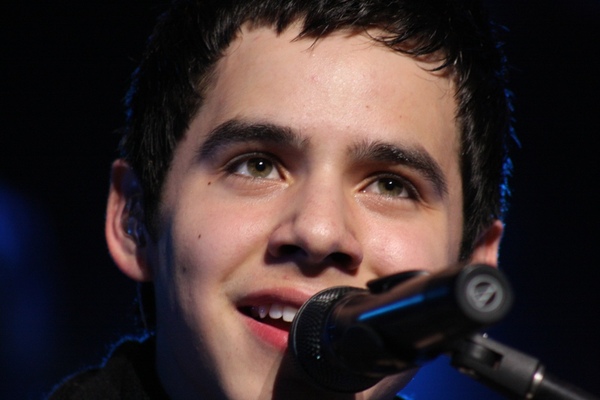 Hey muchachos y muchachas! David here, and I'm in Pocatello, Idaho for our show here tonight. I have to get ready for the show tonight, so I'm going to try and be quick here. Lesley's not on tour with us anymore :(. I'm really going to miss her, but I wish the best for her! I think she's going to be doing some TV appearances pretty soon, so look out for her! Amie Miriello will now be doing the last few shows with us. She is AWESOME. Her album is one of the albums I've been listening a lot too lately. I've mentioned her in one of my blogs before for her song "Snow." It's one of my favorite songs. So I hope you guys enjoy her! It's really exciting to have her on board for a bit haha.

So this last week we had our Pomona, California show. It was our closest show to LA, and I saw a lot of familiar faces in the crowd! haha. I also had some friends come to the show. Jason (Castro) came with some of his family! It was awesome to see all of them, and I'm glad they were able to come. Jennette McCurdy (Sam on iCarly) also came! It was fun just hanging out with all of them backstage after the show. So I hope you guys had a fun time! Thanks for coming to the show! (Idk if either of you even read this but whatever haha.) Jason's been working on a lot of original material right now and Jennette has a new single out right now called "So Close." So if you want... you should check it out! We also had some GREEAAT shows after that. We had Reno, Idaho Falls, and Boise shows. These were some of my favorite shows to do! And the crowds were all awesome! Thanks you guys sooo much for coming out! I've been getting more and more into the shows every night. All right, so I better get ready for the Pocatello show tonight, and then we head for St. George tomorrow. If you guys happen to be near St. George area, please come! We'd love to have all the support we can at that show, and it's sort of the warm up for Salt Lake. If you guys do come, I'd really really appreciate it. But anyway, I better head off now. I'll ttyl!

P.S. I've been keeping up with this season of AI and would love to hear your thoughts on who you like the best. Leave me a message on my mobile fan club line and let me know! haha:)

Song for the day: I Came Around - Amie Miriello
This is another one of my favorites by Amie. I'd also recommend "Snow" again if you haven't listened to that yet! 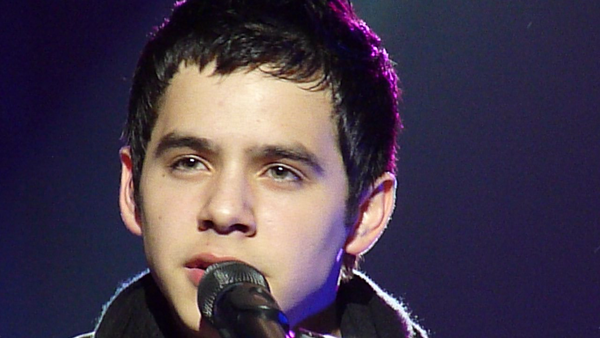 Hey guys! I'm in Boise right now and I'm getting ready for tonight's show. It's coming starting pretty soon haha. I just wanted to let you guys know that tonight is the last show I'm doing with Lesley unfortunately :(. She's been so much fun to go on tour with! I'm really going to miss her. Her band has been really cool too. So I hope you guys have really enjoyed Lesley at the shows, because I sure have. I hope you guys keep up with what is going on with her too, and show her some love. She loves peanut m&m's by the way, so if you ever think about getting her anything... haha. She likes vests and the color purple too. But anyway, just wanted to say that Lesley's been awesome, and I'm sooo glad she was willing to join me on my solo tour. Well I better head out now, the show's starting soon. I'll talk to you guys later!

Song for the day: Thinking Out Loud - Lesley Roy

I love what this song is about, and it's become one of my favorites of hers.

Hey everyone. It's David checking in from the road. We're in Texas for our 2 smallest shows capacity-wise haha. I was able to watch American Idol since we have tivo on the bus! I am really impressed with the people they have this season. Some of the performances that stood out to me were Adam Lambert's and Danny Gokey's performances. I also really liked Matt Giraud's performance. There were honestly a lot of good ones haha. Allison Iraheta blew me away with her voice. I can't believe she's only 16! I'm really looking forward to what else she is going to do. Then Alexis Grace's performance of Dirty Diana I thought was really cool too, even if Simon said it was a little too much. I liked how you could tell she was really getting into it. Ok I know that I could keep going on with everyone's performances because I really liked a lot of them as you could tell haha. But I don't want to ramble on either, since there are a lot of people to talk about. Black or White and Human Nature are 2 of my favorite Michael Jackson songs, so I was really happy to hear those. I guess I'll focus on those 2 then, even though it's not like I've picked any favorites, you know? I'm probably not making much sense. But anyway, I agreed with Simon on what he said about Adam's song. Even though people think he can be a little over the top, he needed that to pull off Black or White. I think he did awesome, and definitely grabbed everyone's attention. That's what you need to do, and that's what he did lol. For Matt's performance it was the first time I had ever seen him perform, and I thought it was awesome how he played piano with that soulful vibe he has to him. It wasn't as big and powerful as some of the other performances, but I think it showed who Matt was and what he was all about really well. He did a good job making the song his own, and I just love that song lol. Well I'd like to go on about each person, but I just don't want to go on not making much sense. So I'll try and write about some of the performances that stood out to me next week. I'm excited to see everyone perform next week! Oh, before I finish I just wanted to say it was cool to see Kanye and Kelly perform during the results show. I love Kanye's creative mind and how he experiments with things. He and Michael Jackson are like geniuses with music in my opinion. With Kelly, she is just an amazing singer and I love her single lol. Fun stuff.... Well I'm going to head out now, but I'll talk to you guys later.

Song for the day: Along with Black or White and Human Nature, I'm going to add Man in the Mirror. There are so many great Michael Jackson songs really, but Man in the Mirror is one that just hits you hard and really gets you thinking. It's one my little brother used to sing when he was little haha. 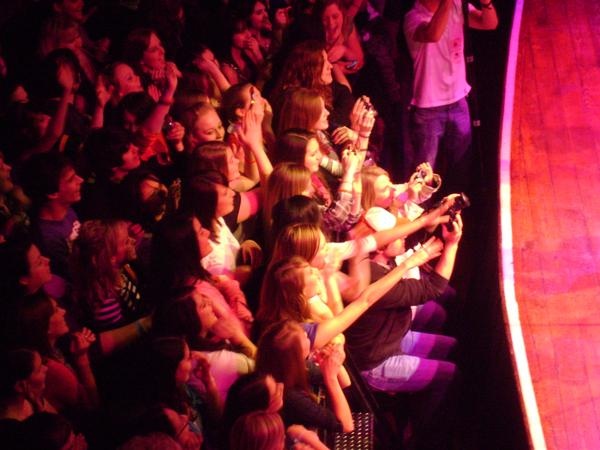 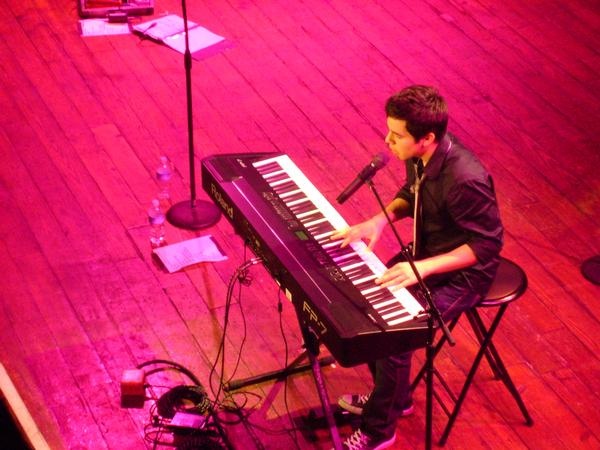 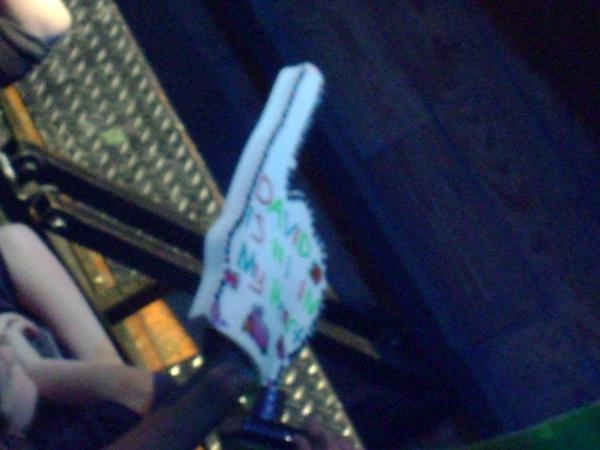 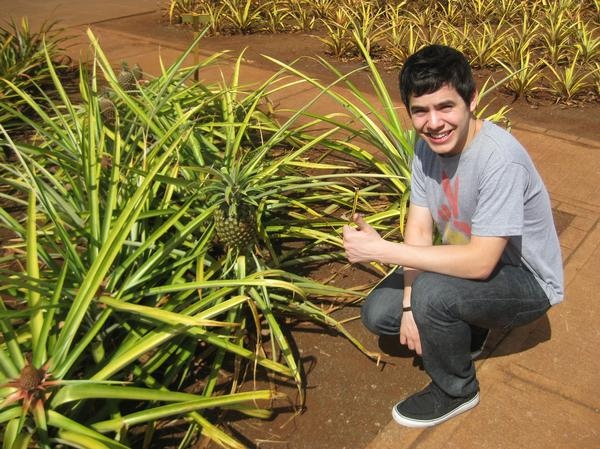 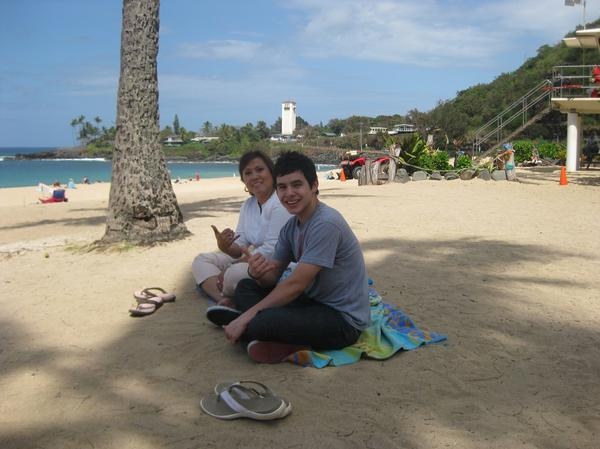 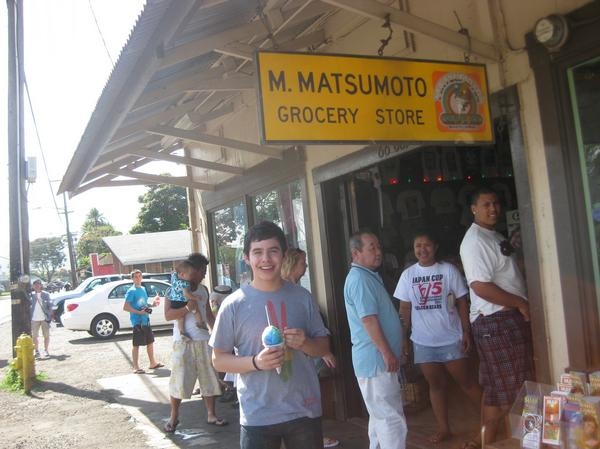 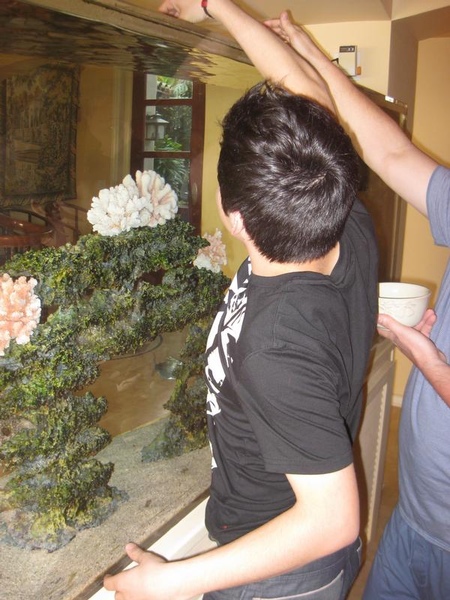 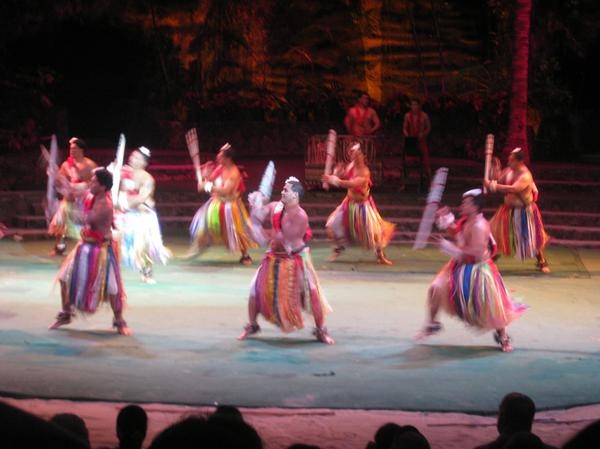 大衛每週一歌：Right As Rain by Adele 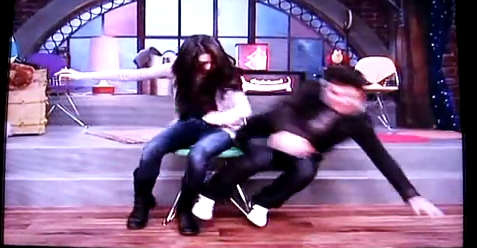 It's David again. I just wanted to remind you about the things that are coming up pretty soon! CRUSH NIGHT on NICKELODEON airs TONIGHT! Right now! And they'll be showing the iCarly episode I make a guest appearance in. Then on Sunday I'll be singing the national anthem at the Pro Bowl all the way in Hawaii! haha. So don't forget to tune in and I'll let you know more about how things have been later on. See ya! 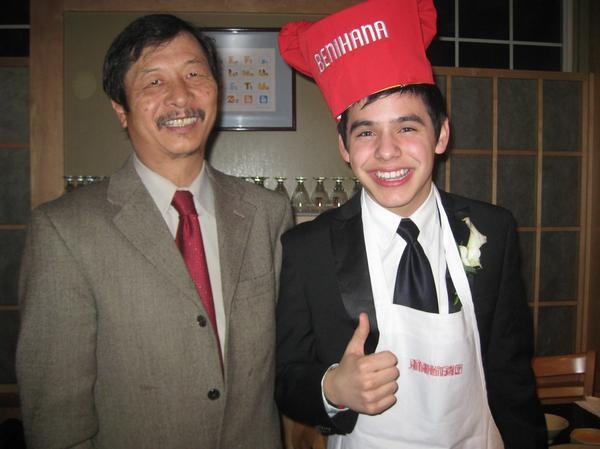 Hey everyone!  David is about to launch an awesome online game but needs your help - it doesn't have a name yet!  The game will basically be a board game and by finding codes on websites and other places you'll be able to move through the board.  Along the way you'll get to hear from David himself and if you make it to the end you'll be eligible to win a grand prize.  What should it be called?
Email davidarchuletagame@gmail.com with the subject "Game Title Submission".  If we pick your suggestion you'll get a major shout-out on davidarchuleta.com.  Deadline for all title entries is Friday, February 6th. 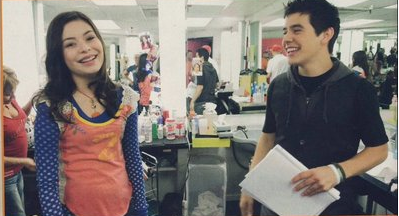 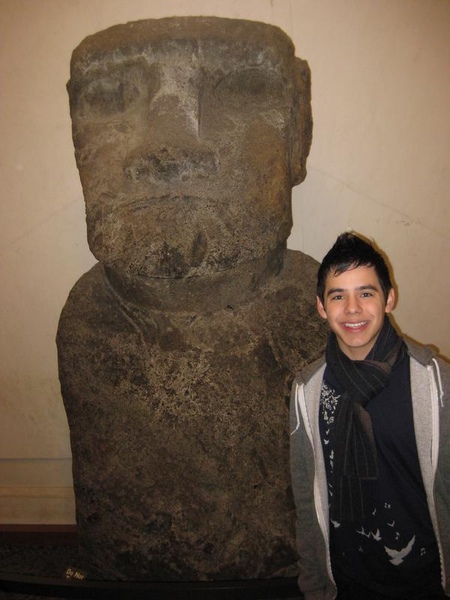 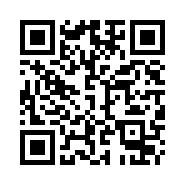