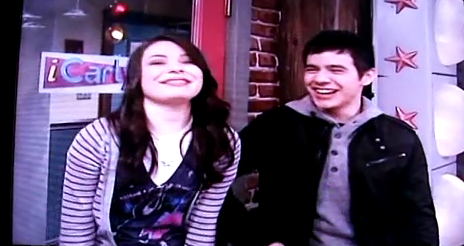 David Archuleta sang in for more than 31 million people for the finale of "American Idol" last year, and sure, he had nerves to conquer.

But ultimately, singing on stage, no matter how vast the audience was easy. It's what he does.

Take him out of his comfort zone, though, give him lines to learn and deliver on a Hollywood sound stage. Now that's a whole different matter, the 17-year-old heartthrob admits, laughing shyly as he recalls his acting debut on Nickelodeon's "iCarly."

"I was a little nervous about it, because I was like, 'I don't know if I can act,'" Archuleta says on phone call while driving home from a voice lesson in Salt Lake City last month.

"But it wasn't too big of a part, just a little guest appearance by me. I was a little worried, since I was playing myself – how they'd portray me.

"But I was pretty good with it – not good at it, but cool with it," he says, sounding every bit the aw-shucks, normal kid he did throughout the 2008 "Idol" season in which he finished second to David Cook.

Archuleta's episode airs at 8 p.m. Saturday. His music video for the single "Crush" will also appear on Saturday, and Archuleta and Carly star Miranda Cosgrove will pop back on screen for brief spots until 10 p.m.

A week later on Feb. 15, the same episode will repeat, but Archuleta will debut a new video for the song "A Little Too Not Over You," and his spots with Cosgrove will be updated.

On the show, Archuleta plays a character named David Archuleta – not much of a stretch, but you play what you know – who ends up competing on an "Idol"-like show called "America Sings."

"It was a lot of fun," Archuleta says. "All the kids on there are fun to be around, really funny kids. They made me feel really welcome."

In addition to Cosgrove, the show stars Jennette McCurdy of Garden Grove as Sam, Jerry Trainor as Spencer and Nathan Kress as Freddie – all except Trainor, teens like Archuleta, and fans of his as well.

"When we first heard he was going to be on we were shocked," says Kress, 16. "The entire week it was, 'Is David going to be here? Is he shooting today?'

"I was in the hair and makeup room, getting touched up after lunch, and I had no idea he was there," Kress says of the day Archuleta finally arrived at the set. "I was talking to Jerry, and I called myself a huge geek or something. And I hear this voice going something like, 'Man, I'm the king of the geeks.'

"And I turned around to see and some people cleared out of the way and there he was," Kress says.

Kress says Archuleta proved himself a natural at the short scenes he stars in for the episode.

"He took it all totally in stride, especially since he had no idea what his lines were until he showed up that day, and we shot it half an hour later," he says. "So in half an hour he pulled it off impressively.

"I think what struck me the most was this is just the most humble, down-to-earth guy," Kress says. "He's just a teenager and he was just one of the guys. He was in no way a diva, like a Hollywood pretentious kind of thing."

Archuleta says he enjoyed the experience, and says he'd like to try more acting in the future, maybe taking acting lessons to learn more about the craft.

"It was a really nice exercise to see, OK, this is what acting's like, and this is the feeling of it," says Archuleta, whose upcoming tour brings him to the Glass House in Pomona on March 17. "It was fun seeing how they shoot a show, and how they go through their lines.

"I was like, 'Oh my gosh, how do they do that?' And it was nice to see that they had trouble memorizing their lines, too."

For now, his music career is just taking off. His upcoming tour brings him to the Glass House in Pomona on March 17. But the prospect of more acting is a definite appeal, Archuleta says.

"I think it would definitely be really cool to get more involved in acting," he says. "I'll see what opportunities there might be in the future."